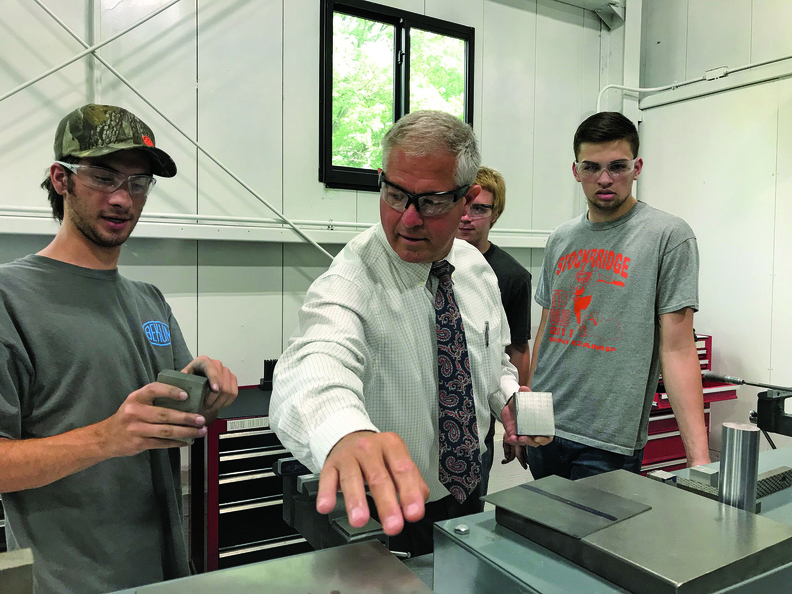 Williamston, Mich. — The average age of workers on the floor at Bekum America Corp.’s manufacturing facility has gone down.

The German maker of extrusion blow molding machinery credits the workforce age drop — from 55 in 2014 to 42 today — to its apprenticeship program, a four-year, 8,000-hour structured training strategy launched in 1994.

The program is registered with the U.S. Department of Labor and includes five areas of study: machinist, machine builder, industrial electrician, steel fabricator/welder and mechatronics. Typically, apprentices work 40 hours a week at Bekum and take classes at Lansing Community College, where they are required to earn 59 credits and maintain a 3.0 grade point average. Bekum covers all tuition and material expenses.

Upon completion, apprentices are issued a journeyman certificate. They can also take an additional three to four classes to earn an associate degree and graduate debt-free thanks to Bekum’s tuition assistance program.

Earlier this year, Bekum invested about $75,000 in an apprentice training center at the company’s 115,000-square-foot facility and U.S. headquarters in Williamston, a small Michigan town east of Lansing. The center — tucked away in a quiet corner of the site’s manufacturing floor — is where new apprentices spend the first nine to 12 months with a dedicated instructor.

The center opened in February and is led by Patrick Smith, a former toolmaker for General Motors Co. who later taught manufacturing at a nearby high school. Smith is tasked with bringing the apprentices up to a basic common knowledge level while using a German apprenticeship model, which is more heavily focused on hand skills and hand tools, he said.

To date, the company has graduated 21 apprentices — 15 of whom are still employed with Bekum. Seventeen apprentices are working through the program now. So, in total, Bekum has 32 employees — about 24 percent of its 134-person workforce — who have either graduated from or are currently enrolled in the apprenticeship program.

He said the apprenticeship program has by far been the biggest contributor to Bekum’s workforce since the company graduated its first cohort of apprentices in 2000.

London — who has logged more than 30 years with the company, starting out as a controls design engineer before earning his way into the C-suite — also gives credit to the team running the day-to-day procedures and to Martin Stark, chairman of Bekum America and a member of the Plastics Hall of Fame, who jump-started the German-style apprenticeship program at the company 25 years ago.

“And to the ownership of the company for taking a long look — and not at the short term, the next sixth months, [but] looking out as a way to grow a business in the long term,” London said of the strategy.

Alleviating a shortage
At Bekum, apprenticeships are viewed as a major resource for workforce development and a way to “grow their own” employees.

“Typically, our older workforce is also mentoring apprentices. … We have a transfer of that knowledge,” said Martin Saur, Bekum’s director of manufacturing. “Experience is hard to replace.”

It’s a win-win approach: Bekum gets to pass down legacy skills from its veteran employees — oftentimes those nearing retirement age — to less experienced workers, ensuring a continued supply of skilled trades talent; and the apprentices gain marketable, journeyman-level skills that can lead to better employment opportunities throughout their careers.

This is important, as the skilled worker shortage stretches to a critical level in the United States.

The number of new jobs in manufacturing is expected to accelerate and grow by nearly 2 million workers by 2028, according to a 2018 study by Deloitte and the Manufacturing Institute.

In addition, more than 2.6 million baby boomers are expected to retire from manufacturing jobs over the next decade, the report said. That leaves a whopping 4.6 million jobs to fill through 2028, but only 2.2 million are likely to be filled, according to the study, citing reasons such as shifting skill sets due to advanced technologies and misperceptions of manufacturing jobs.

The study estimates that a persistent skills shortage could put $2.5 trillion of manufacturing gross domestic product at risk through 2028.

Bekum isn’t immune to the worker shortage, but the apprenticeship program has alleviated some of the negative side effects. Though the process requires some due diligence and commitment from company leadership.

“I feel that companies who have apprenticeship programs and who are active in really developing their employees are going to reap the benefits of that work,” London said. “Is it work? Yes, it’s work.”

“There’s not an immediacy to say we’re going to start an apprenticeship program and then next quarter we’re going to have skilled workers,” he said. “It’s a long-term commitment.” 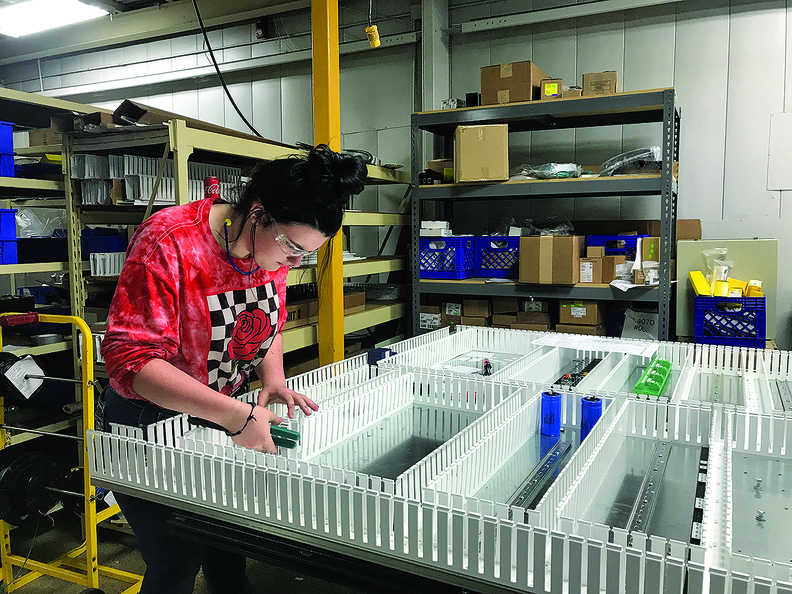 Photo by Audrey LaForest
Ashley Carr, a 19-year-old mechatronics apprentice, has been in Bekum’s apprentice program for just over a year.

‘You are somebody’
Bekum’s Human Resources Manager Amy Busch often visits schools and various career centers in the area to recruit candidates for the apprenticeship program. She said the stereotypical stigma of manufacturing jobs still exists, often among parents who put their high school graduates on the college-bound conveyor belt.

“We’ve had kids who wanted to go into the [apprenticeship] program … and they’ve been so excited,” she said. “And their parents are like, ‘No, you’re going to college.'”

She recalled a young man who went to college for one week, and then called her and asked to be considered for the apprenticeship instead.

“His parents made him go to college,” Busch said.

Stark, who graduated from an apprenticeship program in Germany in the late 1950s, also pointed to the cultural differences between the United States and much of Europe.

But in Germany, each company — big or small and in large cities or tiny towns — will have apprentices, he said. It’s a big deal.

“If a company graduates apprentices, it will definitely be front-page news for that particular town in the newspaper,” Stark said. “Then, you are somebody.”

If you are a bricklayer, a machinist, a welder — any of the trades — you are highly respected, and companies take pride in those employees, he explained.

“The apprenticeship program is the best alternative to going to college. I don’t care what anybody says,” Stark said. “If these people stick with it for three or four years, they have a trade and they are valued.”