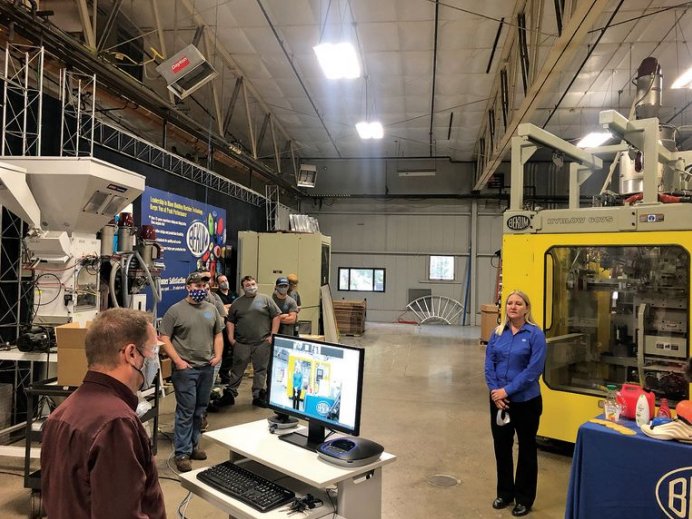 More than 2.4 million American jobs may be unfilled by 2028 due to outdated misconceptions surrounding the industry and the lack of highly skilled workers, according to the Manufacturing Institute.

Ashley Cox wanted to be a makeup artist and hair stylist after graduating high school until she looked at manufacturing and saw it could be a creative outlet, too.

“Here I am building machines from the ground up covered in dirt. You have to try it. Maybe you don’t like it … but see all your options,” Cox told 10 classrooms of middle and high school students tuning into Bekum’s virtual Manufacturing Day on Sept. 30.

The Berlin, Germany-based company makes the machines that produce bottles for orange juice, shampoo and syrup as well as gas cans, Halloween pumpkins and even the insoles for Nike and Reebok athletic shoes.

Cox said she has a satisfying career doing machine makeovers on factory floors instead of cosmetic makeovers at a salon. She specializes in mechanical and electrical systems and spent two weeks in Chino, Calif., refurbishing a 20-year blow molding machine for one customer.

“I enjoy building something from the bottom up and to challenge myself every day — to figure out to wire something differently or make it look better,” Cox said.

Manufacturers like Bekum and PVC profile extruder Veka Inc., which held a virtual Manufacturing Day on Oct. 1, look to the events held every October since 2012 to connect with future talent and reframe the public perception of modern manufacturing to address the skills gap.

More than 2.4 million American jobs may be unfilled by 2028 due to outdated misconceptions surrounding the industry and the lack of highly skilled workers, according to the Manufacturing Institute, a Washington-based nonprofit group that is a workforce development partner of the National Association of Manufacturers.

“I think every business today that has the luxury of being deemed essential — and we’re very thankful we were — is hiring,” said Steve Dillon, Veka’s North American marketing director. “It’s not easy with the labor pool and some of the incentives that are out there for people to stay at home. Sometimes it’s challenging to find people willing to come in and work shifts.”

With $215 million in annual sales, Veka ranks No. 23 among North American pipe, profile and tubing extruders, according to Plastics News’ latest ranking.

The U.S. production plants are located in “fantastic” cities that are great for families and there are chances to relocate to them, Dillon said, noting another perk of Veka employment.

In all, parent company Veka AG, which is based in Sendenhorst, Germany, where it has a 1.3 million-square-foot facility, operates 18 manufacturing plants in 14 countries. The family-owned company bills itself as the largest extruder of fenestration systems in the world. 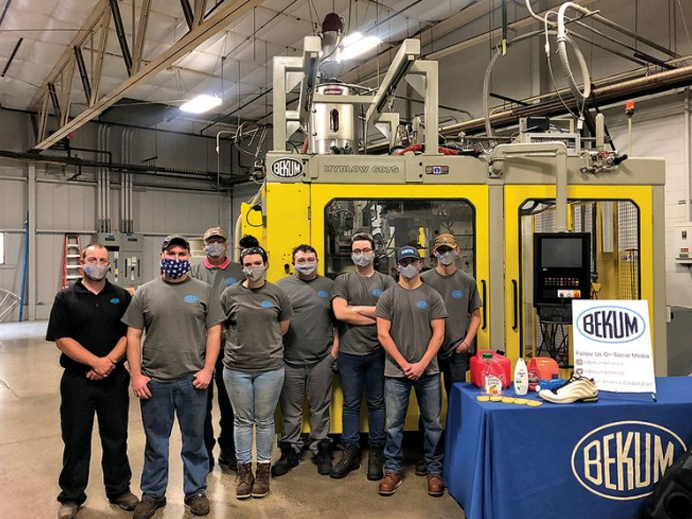 Bekum America apprentices stand near a table of containers produced by the blow molding machines they build in Williamston, Mich.

Filling the pipeline
Thomas Vandebundt, a Veka employee of 40 years, heads up the company’s three-year U.S. apprentice program for electromechanical technicians, plastic extrusion process technicians, and
tool and die makers. He became a Veka apprentice in Germany at the age of 15 and came to the U.S. when he was 23. Now he has 40 years with Veka.

Vandebundt reaches out to area high school and trade school teachers for recommendations about who would be most likely to complete the 440-hour process. Apprentices generally learn about various company departments and then specialize in one.

Veka apprentice Josh Patterson said he dropped plans for a career in arts and media when he learned about the machinist apprentice program.

“I reached a point where I wanted a trade to work in and retire from and to make a decent living throughout,” Patterson said, adding he will complete his program in 2021.

Another Veka apprentice is taking advantage of a tuition-free certificate program offered by the Community College of Allegheny County in Pittsburgh. The two semesters of courses prepare students for careers as manufacturing production technicians with a specialty in plastics.

Keeping the apprentice pipelines full takes a lot of promotion and coordination.

Thomas Barrett, sales project engineer at Bekum America, showed students a photo of himself at age 6 on a Bekum-sponsored T-ball team.

“Little did I know I would turn in that Bekum T-ball uniform for a Bekum work uniform,” Barrett said.

Amy Busch, the company’s human resources manager, was able to recruit four 2020 high school graduates to Bekum despite a statewide school shutdown in Michigan after the pandemic was declared in March. She participated in a “reverse career fair,” where the schools sent businesses information collected from students before the shutdowns.

“That helped tremendously with recruiting this past spring and summer,” Busch said. “I’m not sure how that would’ve worked out otherwise.”

Going forward, Busch said Bekum will give teachers videos to share with their in-class and online students.

Bekum started its apprenticeship program in 1994. Two years ago, the company built and equipped a dedicated apprenticeship training center. Eleven apprentices are going through the program. They will receive 8,000 hours of on-the-job training and about 60 credit hours of tuition-paid college courses to apply to a career in the skilled trades.

“This is 100 percent covered by Bekum, so when you come out of the program, you have no college debt,” Busch told the 200 teens. “And you get a Department of Labor journeymen’s card recognized nationwide.”

Those who complete the program can be hired as machine builders, machinists, electricians, mechatronics technologists, welders and steel fabricators.

Those who want to continue their education can take advantage of a tuition reimbursement program.

“You can get an associate or bachelor’s degree or take supervisor training classes. Or, you can stay on the production floor. You get to determine your future,” Busch said.

Creators Wanted
Bekum is hiring. The company is building a 40,000-square-foot addition in Williamston and needs to fill eight to 10 production positions by December. There are also openings for three engineers and a purchaser.

The company’s customers include well-known automotive, beverage, cosmetic and medical and chemical industry customers. Some have been at the forefront of producing essential packaging, first responders and medical personnel.

Modern manufacturing careers offer a chance to work for exciting industries with innovative technology to improve lives, according to the Manufacturing Institute, which has launched a digital campaign called Creators Wanted to raise awareness among youth, veterans, women and underrepresented communities.

The group says U.S. manufacturers will need to fill 4.6 million jobs by 2028, but more than half could go unfilled because of the skills gap and misperceptions.

To help overcome both problems, by 2025, Creators Wanted aims to increase the number of students enrolling in technical and vocational schools or reskilling programs by 25 percent.