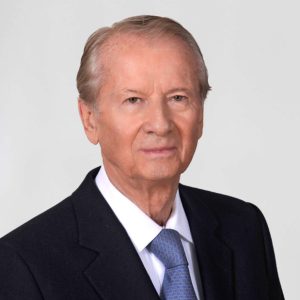 Gottfried Mehnert passed away peacefully surrounded by his family on August 01, 2022 at the age of 87. The Bekum Group mourns the loss of its company founder and the plastics industry loses an outstanding personality who, with his inventiveness, decisively changed extrusion blow moulding over decades and left a lasting mark on it.

Gottfried Mehnert was a pioneer in plastics technology. At the age of 21, he developed his first blow moulding machine and, with his inventiveness and vision, has since made a decisive contribution to the history of blow moulding technology. As founder of Bekum Maschinenfabriken GmbH (1959 in Berlin), he built up a globally successful group of companies. This is evidenced by more than 18,000 machines delivered in over 100 countries around the world, as well as groundbreaking innovations that have resulted in over 40 patents.

At the time of Bekum’s foundation, it was common practice to inflate and shape the extruded parison from the bottom. One of the most remarkable inventions of Gottfried Mehnert, which represents today’s industry standard, is the development of a method to blow the bottle from the top and the world’s first neck finish calibration, which, for the first time, made the tight closure for bottle caps possible.

His inventiveness paved the way for further pioneering developments in the extrusion blow moulding machine sector. These included PVC blow moulding for edible oil and water bottles in the 1960s and the invention of the world’s first double-sided shuttle machine, which was first presented at the “K” plastics trade show in Düsseldorf in 1963. In the 1970s, the well-known co-extrusion process, consisting of 3-layers, became 6-layer co-extrusion through further development by Mehnert. It was the 6-layer co-extrusion that opened up new markets for oxygen-sensitive products and diffusion-tight fuel tanks. Further inventions, such as tie-bar-free clamping systems at the end of the 1980s, made Bekum a world leader in blow moulding technology. Thanks to his unparalleled contributions to the plastics industry, in 2006, he was honored to be inducted into the Plastics Hall of Fame.

Six years ago, Gottfried Mehnert placed the management and shares of the Bekum group of companies in the hands of his youngest son Michael, who has since given the company new energy, such as the new machines of the fully electric 8-series, the award-winning machine design, energy-saving extruders and a modern Industry 4.0-capable control system.

Gottfried Mehnert has stood by and supported his son with his decades of experience in an advisory capacity. Mehnert was a dynamic and tireless pioneer in the service of the plastics industry to the end, to which he dedicated more than 60 years of his life. It was difficult for him to withdraw from active day-to-day business, as he recently remarked again, “Bekum was one of his children.” He was a hands-on managing director who encouraged progress with his competence and broad knowledge and took time for the concerns of his employees.

We are deeply saddened by his death. Our sympathy goes in particular to his wife Heidemarie Mehnert, his sons Matthias, Andreas and Michael, as well as his entire family and friends, who have lost a loving and extraordinary person.

We will honor his memory.