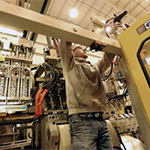 Bekum America at a glance

Bekum America Corp. is based in Williamston, though the corporate headquarters are in Germany.The Williamston location, which opened in 1979, manufactures blow-molding machinery, which create plastic containers for a variety of items and companies. About 100 employees work at Bekum, with about 25 percent of the workforce Bekum veterans of 20 years or more.

Bekum produces the plastic molding machinery that makes those containers a business that over the past 33 years has expanded from a very simple, very basic product line offering very common machines (to) 13 different machine lines producing the largest machines of their type in the Bekum organization worldwide, Executive Vice President and Chief Operating Officer Steven London said.

Bekum America, with about 100 workers, also has added a little holiday fun to its lineup. Its machines have made orange, hollow plastic Halloween pumpkins in what London said was a move that allowed a company to keep its business in the U.S.

“Theres been growth into an area that was traditionally off-shored and that was the manufacturing of Halloween pumpkins,” he said.

The Virginia-based company, which London said he could not name due to a non-disclosure agreement, should begin rolling out millions of the plastic pumpkins created by Bekum-made machines by Halloween next year, London said.

But he said most of Bekums customers are looking for a bit more complex machinery.

Bekums own international endeavors about 20 percent of its business involves companies outside the U.S. earned it the International Trade Award from the Lansing Regional Chamber of Commerce. Bekum was one of five companies and other organizations honored last week for their community contributions as part of the chambers seventh annual Celebration of Regional Growth.

The company also is putting the finishing touches on a $1 million infrastructure upgrade, which includes new roofing, an updated chilling system, improvements to the buildings air supply, fresh paint and more. London said he is also looking to hire an additional four technical employees, especially those with a plastics background.

Other honorees were: Capital Wire & Steel Inc., the Eli and Edythe Broad Art Museum, the Lansing Board of Water & Light and Netvantage Marketing.

“The Celebration of Regional Growth was formed really to recognize and celebrate investments that organizations have been making in the Lansing region, said Ross Woodstock, spokesman for the Lansing Chamber. (Bekum is) being recognized in part because they were the first ones to take advantage of this state program where companies can get grant money to expand in international markets.”

talking to a manufacturer in Ghana who could use Bekum machines for motor oil production, London said.

It will take time to develop relationships and set up the markets and see where the opportunities are, he said.

Most of Bekums international business is with Canada, Mexico, South America and the Caribbean, but the companys internal focus is all about Williamston and the Lansing region.

The business also offers an apprenticeship program thats allowed it to “grow our own employees,” Johnston said.

High school juniors and seniors can take part in the program where they also attend Lansing Community College and maintain a B average. Students work a total of 8,000 hours over the four-year program. Five students currently are in the program and 14 have graduated since the programs start, of which 11 are still employees.

“It really allows us to develop young men and woman with skilled trades that we dont find on the outside, and

also turn them into machine operators that are even harder to find,” London said.